This is a story about a bed, decorating your house with a limited budget yet filling it with things you love, and the power of the Internet.

Since before Ryan and I married, I have always held a deep love for antique furniture items that tell a story. I bought a U.S. Navy desk from the 1940s back in 1999 while visiting my friend Emily in Augusta, GA.

In 2001, my friend Athena and I partnered together and ran a booth at an antique store in Decatur, TN. We spent our Monday nights at the Cleveland Auction buying up items on the cheap, repairing and restoring them, and turning a profit when they sold. (Well, except for Athena’s pair of velvet clown prints…even with a FREE sticker on them, she never had any takers.)

Many of the pieces in our home are either family heirlooms like my grandparents’ bedroom suite, our kitchen table that we had restored that belonged to Ryan’s grandparents, a bookshelf from the pastoral office from the church my grandfather pastored for nearly two decades, and a desk that belonged to Ryan’s grandfather when he was a boy. Besides our master bedroom suite, our bunk beds, and our living room furniture, just about every other piece in our home is second-hand and has a story. 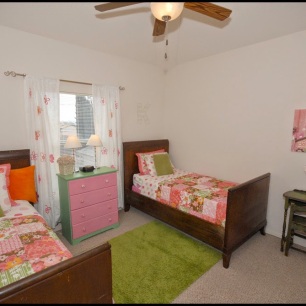 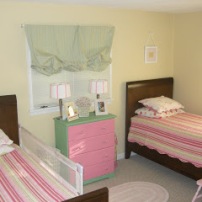 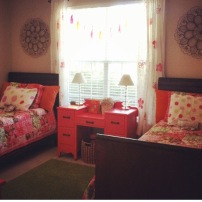 I have a set of antique wood twin beds that came to live with us via Craigslist from a North Georgia bed and breakfast. Our dining room table and chairs I bought here in Augusta via Craigslist for hundreds (from a couple that paid thousands) from the local Weinberger’s. It’s solid and awesome. I have a primitive jelly cabinet I bought when we were newlyweds. And of course, my beloved chalkboard formerly of the Chattanooga City Schools via Bethel Bible Village Thrift Store, is one of my most used, loved, and prized possessions.

As many of my close friends and family know, when we arrived here in Augusta in 2014, the footboard of my grandparents’ antique bed had been shattered. The Army compensated us for this loss, but at the recommendation of the antique repair specialist, we did not try to have it restored for fear that it would continue to break. Earlier this year, Ryan used the headboard and broken footboard pieces to construct a BEAUTIFUL bench seat that I painted.

ALLLLL that said, I love old stuff and we have had need of a bed frame for the box springs and mattress that this broken bed left behind. We have had this need for almost three years. Initially, I bought a universal frame to keep the bed off the floor. It definitely looked unfinished without a headboard and footboard and the metal-only frame wasn’t a permanent solution.

Fast forward to these past few weeks.

As we have been getting information about our next assignment and housing, we knew we wanted to keep a fourth bedroom fully operational. I’ve been scouring sites like Wayfair, Overstock, and even Pottery Barn for inspiration. Even new-made-to-look-old beds were hundreds of dollars and honestly I just couldn’t pull the trigger on any of the beds I saw on those sites.

Last week, I decided to put a feeler out on our neighborhood page as a last resort. I wondered if any of my neighbors might have a bed they were willing to part with. (Crickets!!!)

Below was the look I was after. Nothing too ornate, just simple and timeless.

Since I hadn’t gotten any bites on my inquiry among folks on the Nextdoor app, I took to Craigslist. And what do you know, there was a full size antique brass bed on a nearby city’s Craiglist page in Athens, GA.

Fully aware that often antique or vintage items are double or even triple the price of a new-made-to-look-old piece, I couldn’t believe that Catherine of Athens only wanted $45 for her bed. I knew I needed to snatch this bed up before someone else did or before she changed her mind (or upped her price)!

Ryan knows me well enough to know that when I get something on my mind that he might as well play along and get his muscles and his truck ready because patience or lolly-gagging has never been my style.

I confirmed the condition of the bed, her precise location, and my absolute certainty that I wanted to purchase the bed on a phone call during Catherine’s lunch hour. By 5:30, Ryan was home from work with his truck filled with fuel. Kate, Mae, and I took off down Highway 78- Athens bound!

Good, great, fine. The bed was in good shape. A little dusty and cobwebby but everything looked solid, no major dings, and best of all the bed’s original interlocking metal frame was intact!

Ryan unloaded this gem out of his truck when the girls and I returned home after dark. I didn’t inspect it too closely. We left it in the garage and called it a night. I woke up this morning at 6:00, had my coffee, and went to look at the bed in the garage. I saw this marking of Weisglass and my brain almost exploded.

I spent the next two hours cleaning and wiping down the bed’s parts as well as letting my inner research- nerd take over. My Input Strength* comes in handy in times like these.

I read and read and learned that ole’ Samuel Weisglass (and his wife Rae) owned the Weis(s)glass Brass Bed Factory/Company; created multiple patents; provided brass beds to the Chilton Hotel Supply Company; recovered from an industrial fire in 1909 (losing stock, machinery, and patterns to the tune of $50,000–a hefty sum at the turn of the century); was a Austrian immigrant born around 1876 and came to live the rest of his life in Brooklyn around 1900, N.Y., was of the Jewish faith and died in 1938.

I’m feeling really tempted right now to re-up my Ancestry membership so I can keep digging! I’m also thinking back to one of my favorite books by Adirana Trigiani, The Shoemaker’s Wife. 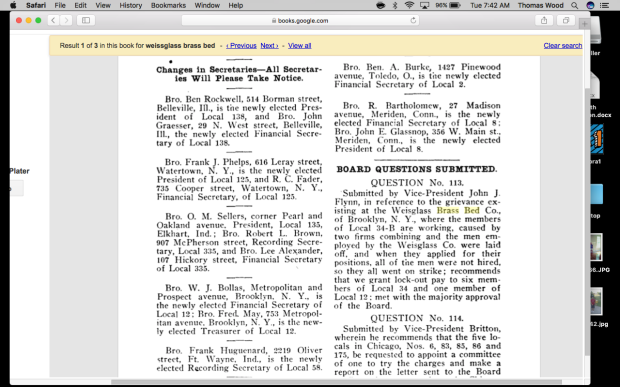 In 1917 The Metal Record and Electroplater notes the company building it’s location at Montauk. 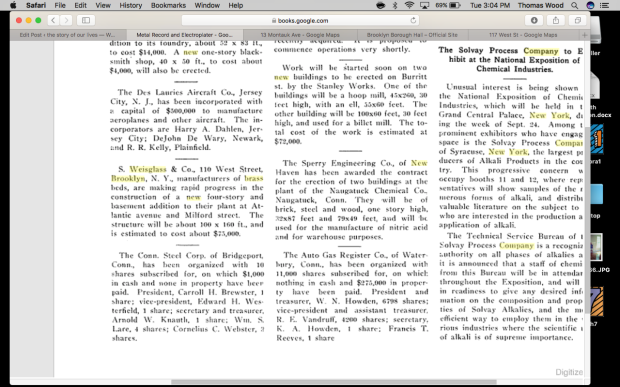 Aerial view of the factory, that according to the Iron Trade Review of 1921, added a second story to the plant. Even on Google Maps it now looks like the building is still manufacturing and selling furniture as Mobilia Furniture. I called and the employee I spoke with said the current owner has owned the building for the past 25 years. He suggested I contact the NYC Buildings Department. 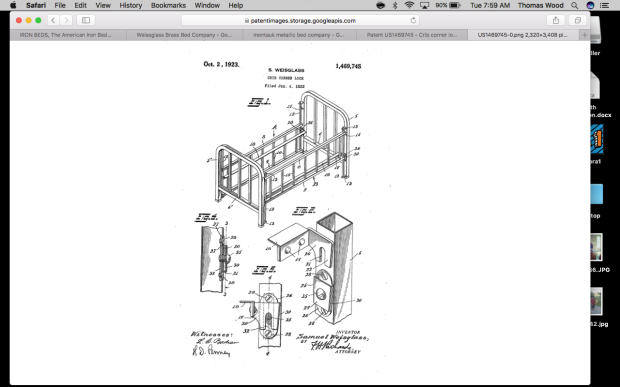 From the 1921 Industrial Directory and Shipper’s Guide, it looks like Weisglass had lots of competitors in the bed-making industry. Here, it’s listed as one of eight bedmakers in Brooklyn.

Short excerpts from Google Books gave me some clues but really turned up dead ends as far as tracking down more information about these beds. From what I can piece together it seems as if the company kept consolidating with other companies and changing names over the course of a few decades. I found some information on the Montauk Metallic Bed Company and the American Iron Bed Company.

All of this research made me super excited for one of next year’s unit studies the kids and I will do about the early 1900s and the United States Industrial Revolution. Now, we have a personal connection to the boom of the steel/metal industry, an immigration story (which I always LOVE), as well as what sounds like a story of personal agency in being a self-made business owner!

Without further adieu, here are some photos of the bed in its current-but-only-for-about-four-more-weeks location in the downstairs guest room here in Georgia. In South Carolina, Mae will use this bed in her room with some cute bedding we’ve already bought. 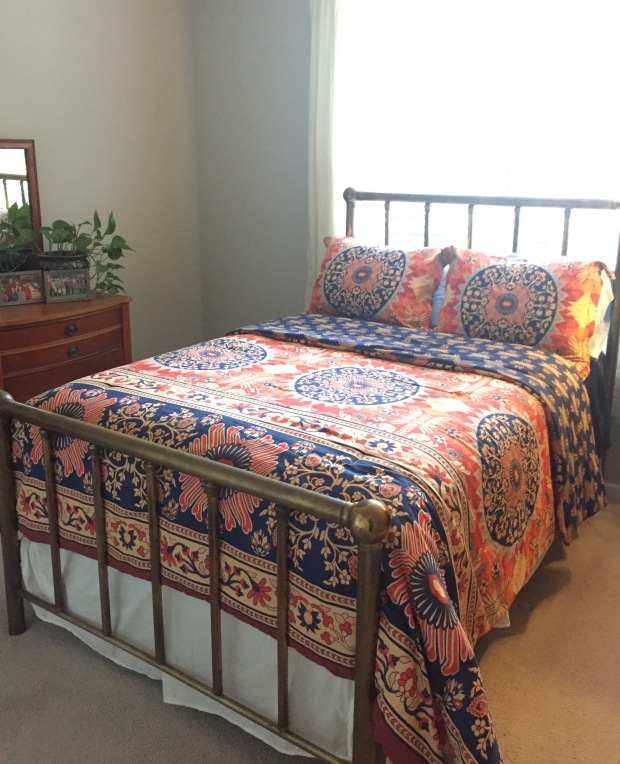 I know this style (or really any of my style) isn’t for everyone. Many people might just see this as an old bed I bought from Catherine’s garage in Athens. Many people might see the eclectic assembly of furniture as just a step above thrift-store, second-hand, used, forgotten, seen-better-days, junk. (That’s okay, some days that’s how I see it too!)

I love the description from the Charles P. Rogers blurb that refers to these beds as “desirable objects that reflect quality, sophistication, and elegance.” (If you want your jaw to hit the floor, see what one of Rogers’ beds will run you in 2017…yikes!) I think I got a deal at $45!

When it comes down to it, I LOVE all of my treasures, not because I’ve acquired them over time or for minimal financial investment, but most of all because they each tell a unique story. This bed’s story will be one I’ll tell for years to come! 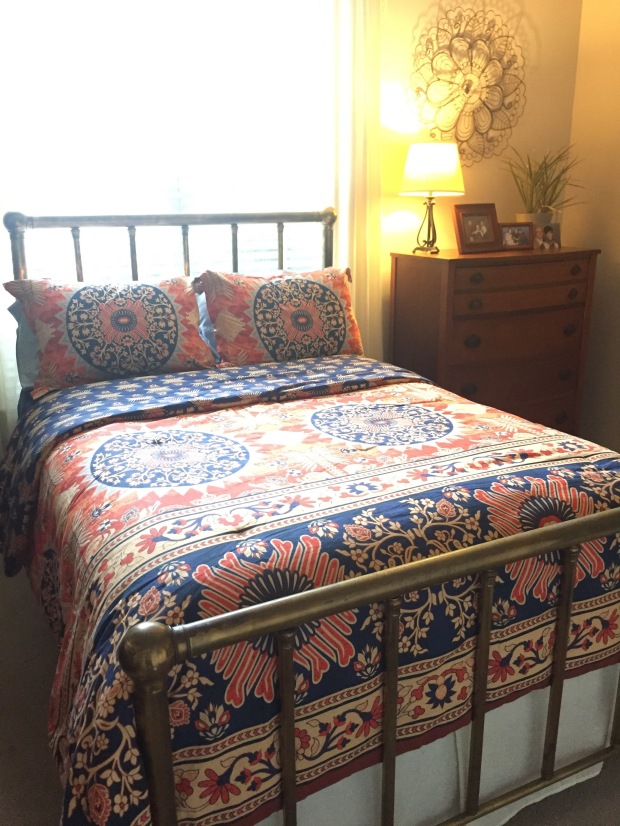