As the school year ended I began to think about what I hoped our summer would look like. I also began to reflect in general; ever wondering if what I say I want my life to look like is actually what it is.

Essentially, I asked myself, “Do my actions and time reflect what’s most important to me?” For the past several months there has been a stirring, a discrepancy, and a desire for realignment.

I decided to write about that process and document it here over the course of four months; May-August. It’s summer and there’s no better time to hit the reset button. I want less stuff, less distractions, and less time spent on Facebook. I want more intentional time with my family, more fun, and more opportunities for practicing good health.

What could be so difficult about that? Why don’t I do the things I want to do and set aside the bad habits of things I don’t want? It seems simple enough, and yet, as humans that is the battle we face against our flesh.

I’m about two weeks in and that battle has been ongoing. I knew habits wouldn’t change overnight. I knew this would be a process. I knew that I’d have to be intentional with my choices, thought processes, and even where I chose to spend my time.

Here’s an update at the end of week two: 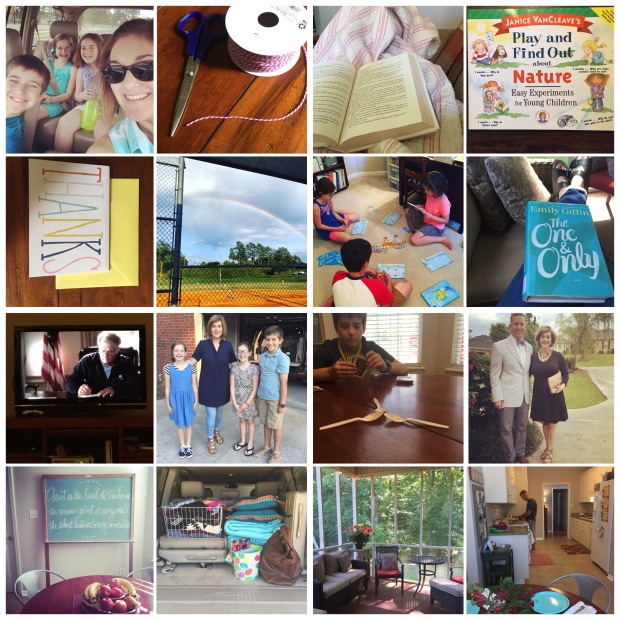 This collage represents 16 highlights of the past week:

| having the kids with me when I made my last trip to campus of the semester | getting creative with teacher gifts that relied more on thoughtfulness than giving trinkets | reading a book for pleasure | giving away another bundle of homeschool items I’m no longer using | taking time to write out thank you notes to express gratitude to the kids’ teachers | enjoying a night of baseball that started off stormy, but ended with a rainbow | kids’ playing a board game instead of being lost in screens | finishing a book that I read for pleasure | finishing up West Wing with Ryan after months of evenings spent watching together | our last day of co-op and honoring a commitment that was one we wanted to abandon | teaching my kids to play Egyptian Rat “Slap” and absolutely wearing them out at it | having an awesome date night with Ryan that was fun from start to finish | putting a fresh reminder on my beloved chalkboard | donating more unused items to Goodwill and emptying the house of more clutter | l.i.v.i.n.g. out on our back porch | and hosting company (18 people in total) at our house to say “see you later” to some treasured Army pals |

Here’s to week three of our Simple Summer. What have you done lately that felt like a win for intentional living? What have been your struggles? I’d love to hear from you.