I almost hate to call these posts The State of Our Garden since I have done almost nothing toward putting in or maintaining it besides a trip to Lowe’s with Ryan and photographing our plants.

I keep saying that my part comes when the harvest arrives. I’ll be cooking and canning and freezing.

Right now, after a good solid month of equal parts rain and sunshine, our plant babies are growing well. Ryan did have to replace a squash plant over the weekend, but everything else is growing well.

You can click here to see week 000 and a full list of what Ryan has planted. It’s crazy to think about what all has changed in only one month. We have run into some drainage problems due to the location of our garden and the lack of gutters on our house. Ryan put down some mulch and that seems to have helped. 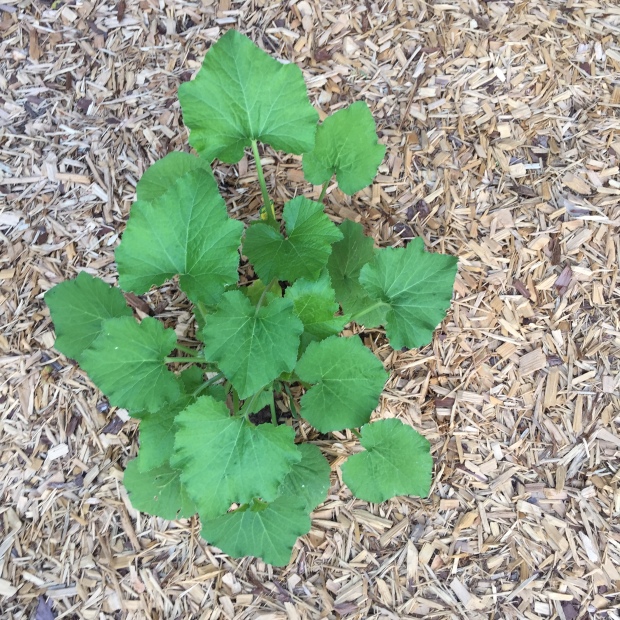 Ryan has been pulling weeds and adding some plant food to perk things up even more.

And the tomato plants were finally ready to have early bamboo stakes.  I suspect that the cages will be coming soon.

That’s where we are at week 004. I think the next update will be even more exciting. This year I have become overly interested in plants and growing things. I think as a military spouse when I feel constantly uprooted and like my own roots have begun to grow only shallowly, having tangible plants makes me feel like we are invested in our town, our community, our house and our life here.

My friend Gwen prays a prayer over military spouses when it’s time for them to say goodbye. She prays that their “roots wouldn’t dangle for long.” We have been here almost a year now and I feel like my roots are finally no longer dangling.

It’s good to be grounded and growing right where I am planted.

“And don’t be wishing you were someplace else or with someone else. Where you are right now is God’s place for you. Live and obey and love and believe right there. God, not your marital status, defines your life. Don’t think I’m being harder on you than on the others. I give this same counsel in all the churches. Were you Jewish at the time God called you? Don’t try to remove the evidence. Were you non-Jewish at the time of your call? Don’t become a Jew. Being Jewish isn’t the point. The really important thing is obeying God’s call, following his commands. Stay where you were when God called your name. Were you a slave? Slavery is no roadblock to obeying and believing. I don’t mean you’re stuck and can’t leave. If you have a chance at freedom, go ahead and take it. I’m simply trying to point out that under your new Master you’re going to experience a marvelous freedom you would never have dreamed of. On the other hand, if you were free when Christ called you, you’ll experience a delightful “enslavement to God” you would never have dreamed of. All of you, slave and free both, were once held hostage in a sinful society. Then a huge sum was paid out for your ransom. So please don’t, out of old habit, slip back into being or doing what everyone else tells you. Friends, stay where you were called to be. God is there. Hold the high ground with him at your side.” {I Corinthians 7:17-24, The Message}